Placenta Traditions Around the World

"In Indonesia, the baby's placenta is considered its twin and becomes a kind of guardian for the child. Family members and birthing attendants bury the placenta outdoors.
The Igbo of Nigeria, some people of Malaysia, and many other cultures also consider the placenta a twin and bury it outdoors.
In Cambodia, the location of the placenta's burial is very important, as it is considered the origin of the baby's soul. Spiked plants are often planted around the burial place to keep away evil spirits.The tradition in Cambodia is to wrap the placenta in banana leaves and keep it close to the newly born child for three days, after which it is given a burial.
The Maori of New Zealand call the placenta the whenua, or "the land." The placenta and the umbilical cord are placed in a special container and buried on the child's tribal land, thus reinforcing that child's tie with their birthplace. Ipu Whenua

In many Asian countries, especially China, the placenta has long been regarded as a source of life and energy. The placenta is dried and taken as a supplement or added to food dishes for it’s health and healing benefits.

In Thailand, the placenta is cured with salt and placed in a clay pot. The pot is buried in a special site under a tree with the month of the child's birth determining which way the pot will face.

There are a few regions in South America where the
the placenta is cremated and and buried in the ground where it is believed that it will be protected from evil entities.

In America, the Navajo Indians bury the placenta within their reservation as an honour to their ancestors. Items are also commonly buried with the placenta such as books or religious items in hopes that the child will be smart or pursue certain skills or traits.


Hawaiians also practice burial rituals with a new tree planted over the placenta. It is believed that the placenta must be treated as a sacred object and that proper burial rites be given to ensure the good health of the new baby.

The placenta is highly regarded in many cultures around the world, and this sacred treatment is a testament to the significance of the placenta as an important symbol of life, energy, and spirit.


Birth control?!?
The placenta isn't exactly considered birth control, but reportedly in Transylvania, a couple who wanted no more children would burn their baby's placenta, and then the father would drink the ashes to render himself infertile (supposedly).
In the Ukraine, families avoid burying the placenta in a doorway, which could mean the couple will have no more children. Some Ukrainian midwives claimed they could tell how many subsequent babies a couple would have by examining the placenta.
It appears that humans are more likely to bury the placenta than consume it. But either way, it's clear that many cultures consider the placenta an important symbol, of life, spirit, and belonging.

Placental Traditions around the World
Posted by Marie the Midwife at 1:57 PM No comments:


Throughout pregnancy women experiencing 'Braxton Hicks' contraction, they are painless uterine tightening's usually lasting for about 30 seconds and helps to tone the uterus to get ready for labour.  False labour is a term that has fallen out of fashion because, your body is certainly not false.

Please note that painful uterine contractions before 37 weeks of pregnancy is not normal, please speak with your midwife.

The information below is from the baby centre and it explains how to tell the difference between Braxton Hicks contractions and when you are in labour contractions.

How do Braxton Hicks and labour contractions differ?

We do not recommend you Google your condition, if unsure about what you are experiencing, please speak with your midwife.
Posted by Marie the Midwife at 4:15 PM No comments:

Safe Sleeping and why you should not let baby sleep in a car seat, bouncer or swing.

Very important advice here - around about 28 weeks of pregnancy midwives the importance of safe sleeping for baby. Government advice recommends the following :

Baby sleeps in their own bed (no bed sharing), Face up, Face clear and smoke free.  Do not have any pillows or toys in the bed with baby.  Also, fasten the safety harness first and then put the wrap over baby.  If going on a journey, stop and have a break after two hours travel, take baby out of the car seat and let him/her have a feed and a stretch before continuing your journey.

"Babies need between 12 and 16 hours of sleep each day depending on their age. But where they sleep is even more important than how much they sleep—and a new study set to be published in The Journal of Pediatrics found that “sitting devices” like car seats, swings, and bouncers can lead to injury and even death if babies are allowed to sleep in them.

Researchers examined the deaths of 47 young children under the age of 2, all of which occurred while in a device made for sitting or carrying. Two-thirds of the deaths occurred in car seats, while the rest occurred in slings, swings, bouncers, and strollers.  Asphyxiation (positional or strangulation) was the cause of death in 46 cases; 52 percent of the deaths were caused by strangulation from the device’s straps.

Related: How Safe Is Your Baby’s Sleep?
Sleep-related deaths are the number one cause of death in kids between 1 and 12 months old. To avoid injury or death, experts urge parents to never, under any circumstance, leave infants and young children unsupervised—sleeping or awake—while in these devices. They also advise that car seats should only be placed on a firm, stable surface and any buckles should be fastened correctly.


The best place for your baby to sleep is on her back, in a crib that has a firm mattress and is free from any loose bedding. To be sure your baby’s sleep environment is as safe as can be, check out the American Academy of Pediatrics’ Safe sleep
guidelines."

Safe Sleeping
Posted by Marie the Midwife at 3:45 PM No comments:

I have read a few articles about men 'experiencing' labour just so they can be aware of what their partners go through.  I have to agree that I agree with what is being said below in quotation marks. Men only experience just a short while of, not even labour pains, they are shocked to experience some degree of pain.  They do not experience the oxytocin release bringing with it each the knowledge that each contractions brings their baby closer and also the immense love that a newly birthed mother feels for her baby.

"The midwife told the men to accept the pain to make it easier. Acceptance is a big part of labor. It seems far fetched however, for the men who are voluntarily being shocked. There is no great end goal they are reaching. They do not have the reward that each contraction brings them closer to unbelievable love.
This is the major problem with the experience. These men are shown a minutiae of the actual pregnancy and birthing experience. To isolate only the pain of labor cheapens the experience of pregnancy. It is a small part of the package deal. To focus on the pain alone is problematic because along with the fear, there is an excitement and joy that cannot be recreated." 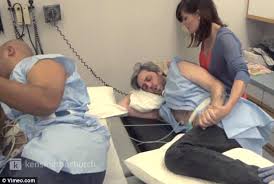 Should men experience labour?
Posted by Marie the Midwife at 12:48 PM No comments:

Email ThisBlogThis!Share to TwitterShare to FacebookShare to Pinterest
Labels: should men experience labour?

Using Belly paint - Shows how the baby fits into the body.

This is amazing and shows just how wonderful the female body is.

"Despite reading all about how my babies were in my womb in the head-down position I never could quite wrap my mind around what that looked like. Even knowing it was incorrect, in my head my babies were always right-side up inside me, or at the very least laying horizontal."

For more information just click on the link below.
Belly Paint - How baby fits into the body.
Posted by Marie the Midwife at 12:34 PM No comments:

Email ThisBlogThis!Share to TwitterShare to FacebookShare to Pinterest
Labels: Belly painting in pregnancy

Wonderful and informative website for women who are considering a home birth.

Home Birth Aotearoa
Posted by Marie the Midwife at 1:52 PM No comments:

I began to read about Sheila Kitzinger back in the late 1970's and was a strong campaigner to reclaim childbirth as being a normal life event and not something that should be medicalised.  I was sorry to hear of her passing and grateful that she influenced women to make their own choices and fight for their right to choose.

Sheila Kitzinger was the natural childbirth activist and author 'who taught British women how to give birth', with generations of mothers following her invaluable advice. Here, in memoirs completed just before her death in April, aged 86, she lays bare her colourful and charmingly eccentric life story.
When I was born in 1929 — in Taunton, Somerset — birth was a natural affair. Women gave birth at home so they were on their own territory, even though a family doctor and nurse were normally in attendance.
Nor were women expected to remain on a bed. My own mother recalled looping a towel over the corner of her bedroom door so she could pull on it while standing during the second stage of what proved to be a difficult labour.

Read more by clicking on the link below.
Reclaiming childbirth
Posted by Marie the Midwife at 11:24 AM No comments: