11 Things you didnt know about breastfeeding

1. Who needs the gym? The metabolic energy needed to breastfeed a baby each day is the amount you’d use to walk seven miles.
2. It’s not always easy to learn, but it is instinctual. Newborns held skin-to-skin in the first hour or two after birth may push their way toward mom’s breast and start feeding on their own.
3. Liquid gold. Human milk is sold on the Internet for $4 per ounce. That’s about 262 times the price of oil.
4. You’re probably a righty. Almost three-quarters of moms produce more milk with their right breast (and it has nothing to do with being right-handed).
5. Distinctive scent. Breastfed babies can practically pick their moms out of a lineup based on smell alone.
6. Know your nipple. Breast milk sprays out of many holes, not just one. The exact number varies from mom to mom.
7. Bigger isn’t necessarily better. The amount of breast milk a mom produces has nothing to do with her breast size.
8. Implants don’t impact. Most women with breast implants are still able to breastfeed.
9. A “breastfeeding high.” Nursing baby triggers the release of the hormone oxytocin, which relaxes you and baby both.
10. The ’60s sucked for nursing. US breastfeeding rates were lowest in the late 1960s and early 1970s, when only 20 to 25 percent of mothers breastfed.
11. Hang in there! In 2011, 74.6 percent of US babies were breastfed (ever), but by six months, only 14.8 percent were exclusively breastfed.

11 Things you didnt know about breastfeeding

Posted by Marie the Midwife at 5:05 PM No comments:

What is an Ultrasound Scan?


An ultrasound scan is a procedure that uses high frequency sound waves that bounce off the baby in your womb and uses echoes to create an image of your baby.

When are scans done?  Many women have at least one scan in pregnancy but some women do not wish to have any scans.

Dating Scan
Done in early pregnancy if the woman is unsure of her dates although a more accurate dating scan is ideally done between 10-13 weeks pregnant when a crown -rump length is measured.  Later dating scans will measure the baby's head circumference and the gestational age will be estimated.  This scan can also detect if you are expecting one baby, twins or more.  It is also done to identify the cause of any vaginal bleeding or pelvic pain and to see if your baby is developing in the womb and not in the Fallopian tube (ectopic pregnancy).

Nuchal Translucency Scan (NT)
Done between 11 weeks - 13 weeks and six days, this scan measures the fluid around the back of your baby's neck to assess your chances of having a baby with Downs Syndrome.  The nuchal translucency is usually done in combination with maternal serum screening (first trimester screening).

Anatomy Scan
This scan is performed between 18-20 weeks pregnant.  This scan will measure the baby's gestational age, size, weight of the baby and position of the baby.  The sonographer (person who  carries out the scan) will also check your baby's body to see if any problems.  Your placenta will be checked to see where it is situated in your womb and to check the fluid (liquor) volume that surrounds baby.  There are many abnormalities that cannot be detected in the womb.  If any concerns have been picked up by the scan, your midwife will refer you to the Consultant obstetrician.

Scans for other reasons
Amniocentesis or Chorionic villi sampling (CVS) to check the location of the placenta and the position of your baby.
Growth scans.  These are performed on a more frequent basis if there are concerns for the growth of your baby or you have had a previously small baby.
For diabetes, twins or any other medical conditions.

How is an ultrasound scan carried out?

The scan is done by a trained sonographer who has a postgraduate diploma or Masters degree in ultrasound scanning.  If you having a special procedure such as an amniocentesis or CVS, the scan will be performed by an Obstetric Consultant.

If you are having a dating scan or nuchal translucency, you will need to drink at least 3 glasses of water an hour before your appointment to esure you have a full bladder.  This helps to push your uterus out of your pelvis to give the sonographer a good view of your baby.  He/She will put some gel on your tummy and move a hand held device to get an image of your baby.

It is not always possible to get a clear image of your baby using abdominal ultrasound and sometimes the sonographer will carry out a vaginal scan.

An ultrasound scan does not hurt but if you have a full bladder there may be mild discomfort, if you are in pain, please let the sonographer know.

When your scan is completed the sonographer will give you an image of your baby to keep and may be in the form of a picture or DVD.

Are there any risks with an ultrasound scan?
Although to date, the results of follow-up studies on patients and children
who had been examined before birth have not demonstrated a causal link between adverse health effects and ultrasound exposure (Australasian Society for Ultrasound in medicine) it would be wise to limit the number of ultrasound scans performed in pregnancy. 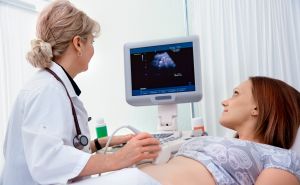 Posted by Marie the Midwife at 5:35 PM No comments:

My dream of becoming an independent midwife was when I first came over to New Zealand.  I thought the New Zealand midwifery system was excellent in the way that it offered total midwifery care from conception to four to six weeks post delivery.

I thoroughly enjoyed working as a core midwife in hospital, yet I yearned for the freedom of independent practice and part of that dream was meeting and joining up with a like minded midwife.  It was then when Maureen came along and everything just fell into place.  They say energy flows where attention goes and Maureen is just the best backup and partner anyone could wish for.

We started off working two days a week at another practice but our aim was also to set up our practice that was central to Whangarei.  We wanted to be able to meet with our clients at any time that was convenient for them and to create a space that was designed to accommodate a learning environment at the same time.  This would give us the opportunity to be free of time constraints and the ability to expand should we wish.

It was while searching for business premises to rent that we came across 87 Otaika road, Raumanga.  We had found the ideal place, central to Whangarei and not far from the hospital.  Its large room provided a waiting area where we could put our teaching posters on the wall, hang our various informative leaflets in the holders, a table for cards and booklets.  We put a blackboard on the wall where the children can draw, a childrens table and chairs for them to sit down and play with the toys while mum gets checked.  It also meant that Maureen and I could have our own office where we could see our clients in privacy as well as do our paper and computer work.

If you read my blog and you are in the area, feel free to drop in and see us at anytime, Maureen and I would love to meet you. 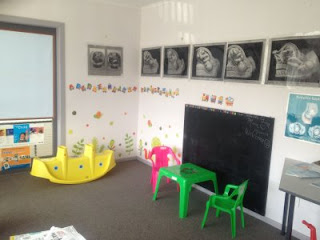 Posted by Marie the Midwife at 3:02 PM No comments:

Learning languages in the womb

I have always believed that the baby can hear and even see a certain amount of light while in the womb, and mums have told me that whenever their favourite piece of music is playing or they are listening to their favourite TV show, they have noticed that their baby becomes more active.

This is a very interesting article with a web link after the article if you would like to read more.

"For years and years, soon-to-be parents have asked themselves the same question, “Can baby hear us?” and for just as long the question has gone unanswered. Now, however, researchers have finallycome to a conclusion and it’s sure to be one that mom and dads-to-be are over the moon about!
Newborns are much more attuned the the sound of the native language than we ever thought, linguists say. Newborns can pick up on distinctive sounds of their mother tongue while in utero.
The unbelievable research was led by Christine Moon, a professor of psychology at Pacific Lutheran University. “We have known for over 30 years that we begin learning prenatally about voices by listening to the sound of our mother talking,” Moon said. “This is the first study that shows we learn about the particular speech sounds of our mother’s language before we are born.”
Prior to the study, it was widely believed that infants learned small parts of speech after they had left the womb. This study states the opposite. “This study moves the measurable result of experience with individual speech sounds from six months of age to before birth,” she said.
Seriously — how incredible? All the time the proud parents have spent singing and talking to their little babe are worth every moment (not like we’d suggest you stop doing it otherwise – it’s important to have a connect to your child pre-birth).
For her study, Moon tested newborn infants shortly after birth while still in the hospital in two different locations: Madigan Army Medical Center in Tacoma, Washington, and in the Astrid Lindgren Children’s Hospital in Stockholm, Sweden. Infants heard either Swedish or English vowels and linguists could control how many times they heard the vowels by sucking on a pacifier connected to a computer.
In both countries, the babies listening to the foreign vowels sucked more, than those listening to their native tongue regardless of how much postnatal experience they had. This indicated to researchers that they were learning the vowel sounds in utero."
Babies learn languages in the womb 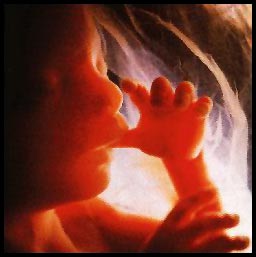 Posted by Marie the Midwife at 1:53 PM No comments:

We hope that everyone had a wonderful Christmas and New Year?

Maureen and I have have been to many houses over the years and met all the family pets such as dogs, cats, donkeys, horses and have even seen house trained pet sheep. but we have never seen an Ostrich! 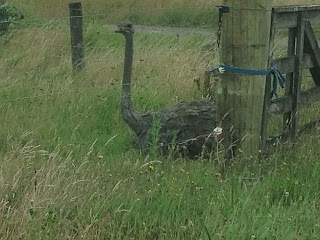 It was great to see this critter looking curiously at us as if to ask what we were doing.  I laughed to myself wondering if people could tell Maureen and I are townies because of the way we marveled over this exotic creature when everyone else took it in their stride :-)

The last time I saw an ostrich was at Chessington Zoo in England years ago when I was took my children for a day out.  I did just as much ooo'ing and ahhh'ing as I did back then.

Have a fantastic day everyone.

Posted by Marie the Midwife at 6:46 PM No comments: